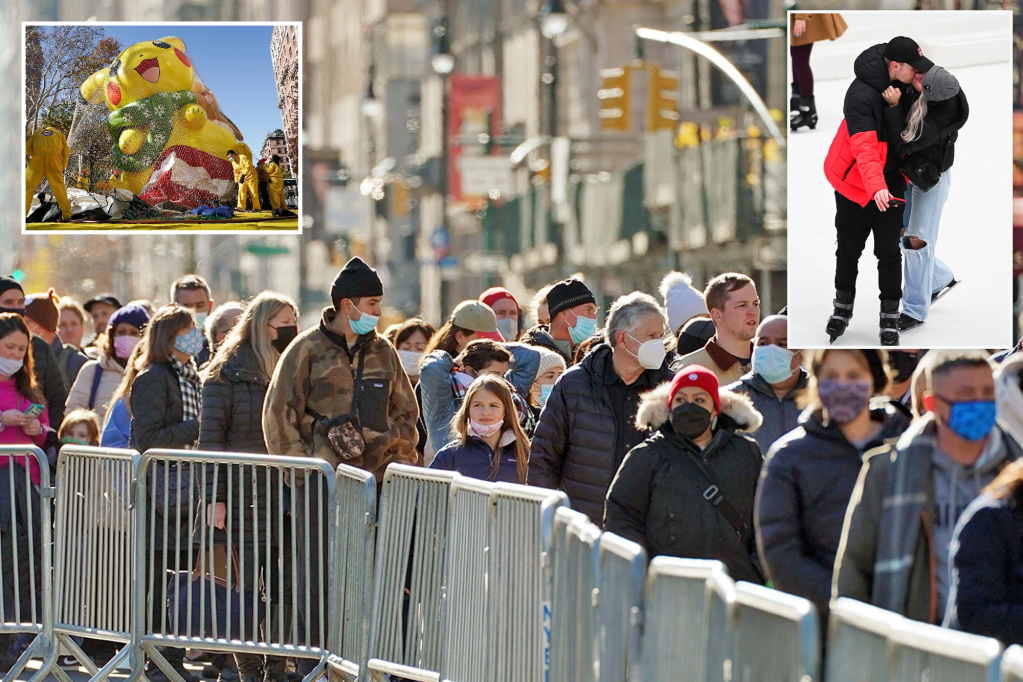 Welcome back, New York City, in all your crowded, cluttered, patience-testing glory. Good riddance to the “ghost town” that the world media warned us about should be our permanent destiny.

I hate loud noise. I hate overcrowding. But I say to The Big Apple on this golden, parade-redux Thanksgiving holiday:

Be as loud and as congested as you can be. Sidewalk trumpeters, blow your rusty horns to the peaks of the skyscrapers. Bongo drummers, awaken the living dead gathered under “sidewalk bridges”.

Plenty of pandemic silence and its close cousin, “Is it over?” preliminary, abundance-of-caution, masked variant (to use the tasteless word).

I’m a notoriously horrible crank, maybe I want to change my tune six months from now. Today, I love the countless daily dehumanizing episodes whose 20 months of absence made them seem precious.

Slow-moving tourists in the center asking where Wall Street is: Folks, you’re on Wall Street, may I help you with something else?

I love that friends say they can not get Thanksgiving reservations at any restaurant in town because they are already booked.

I love finding out about sidewalk vendors selling junky wooden animals on Sixth Avenue in Midtown. I loved steering through a bubbly “Welcome Back to the Office” party for a law firm in the building where I work.

At Bloomingdale’s men’s department, I (almost) enjoyed going in search of help because the salespeople were more busy with customers than they had been for a long time.

The long wait at the Apple Store Genius Bar was more soothing than annoying. Starbucks baristas, brought to a virtual standstill by having to handle multiple orders at a time, charmed me.

I’m excited about the sight of young people camping on the sidewalks of Rockefeller Center in hopes of tickets to “Saturday Night Live,” whose cast members were not even allowed to enter the same premises last year.

Subway crowds are best of all. The trains are filling up again – not yet to pre-pandemic levels, but upward trends. Not just on the busy Manhattan, but on the J-line to Brooklyn’s Broadway Junction, my childhood high station that was frighteningly lonely a few months ago.

If you would rather stay inside and watch the parade on TV, know that more people around make everyone safer. It is no coincidence that metro crime has finally started to decline as trains get fuller. Times Square’s annoying Elmos and the crowds they draw may be a better means of deterring crime than officers on horses.

Anyone with a heart, a brain or an ounce of love for Gotham should rejoice.

True, there were small comforts during last year’s lockdown and it turned on again, off again, masks off, masks-on reopening of the purgatory that followed.

I briefly enjoyed the unfamiliar comfort of walking in Central Park with almost no one around me. I did not miss the noise of the children as the lobby of my 360-apartment building was devoid of life and the chairs were pulled off with yellow tape as if at a crime scene.

On August 1, 2020, I even wrote that a minor blessing at the shutdown was its “civilizing” impact on the bustling, tourist-trampled city.

I complained that the pre-pandemic city was a “mosh-hole” of jammed restaurant coat checks, too long queues for Broadway theater toilets and the weekend gridlock of “overlapping parades, street fairs, street races, fireworks shows and bike events.”

But we all went a little crazy last year – can you remember when we thought former Governor Andrew Cuomo was a hero? – and it was my own insane moment.

I had “civilization” long enough. So judging by the fall revival, everyone else did.

Those who want to yell that I do not know what I’m talking about should go down and see the daily updates of the city health ministry, click on the “latest trends” box and look at data on hospitalizations and deaths among the vaccinated. There have been almost none since August despite slightly rising case numbers.

Bill de Blasio may be our worst mayor ever, but he’s not too stupid not to read the charts. That’s why we’re getting our Times Square New Year’s party back.

So go out and enjoy the chaos. Be kind to the tourists. And let’s all have a wonderful Thanksgiving. We deserved it.