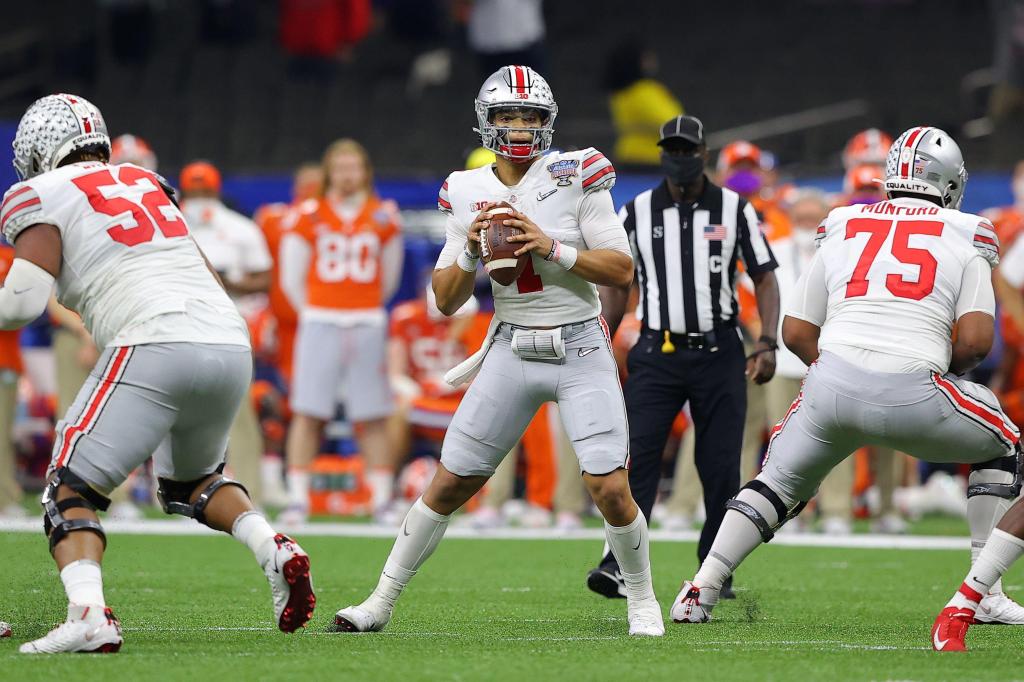 When Cairo Santos sent a 28-yard field goal through the posts while the seconds ended Thursday afternoon, he saved the Chicago Bears from a bad week that turned into an even greater embarrassment.

The Bears did not have to give the Detroit Lions their first win of the season at Thanksgiving at Ford Field.

Not after Bears rookie Justin Fields injured his ribs and was forced to sit out. Not after a report surfaced that Bear’s ownership told coach Matt Nagy that it would fire him after the Thanksgiving game. Not after Nagy’s bosses left him to refute the report to the media himself.

Santos’ field goal in the final seconds lifted the Bears to a 16-14 victory over the Lions, who got a five-game losing streak and ended a nightmare in a week.

Bears quarterback Andy Dalton, who filled in for the injured Fields, completed 24 of 39 passes on 317 yards with a touchdown and an interception to lead the Bears to victory.

The winning drive included a great play at third-and-5, with Dalton pulling away from the pressure and finding Damiere Byrd for a 13-yard pass to get to midfield. He hit Byrd again on the third and 4th from the 11-yard line – a third attempt that was shortened by 5 yards when the Lions were penalized for calling back-to-back timeouts.

Jared Goff’s 17-yard touchdown pass to TJ Hockenson gave the Lions a 14-13 lead with 1:46 left in the third quarter.

The Lions got the drive going when Goff threw a 17-yard pass to Calif Raymond, and the Bears inside linebacker Christian Jones was called to a 15-yard unnecessary roughness penalty to throw Raymond down at the end of the game. It got the lions into Bears territory.

Goff completed 21 of 25 passes in 171 yards and two touchdowns against a Bears defense that lost linebacker Roquan Smith to a hamstring injury.

After the Bears led 13-7 at the break, they did not score in the third quarter.

Santos missed a 53-yard field goal attempt on a drive that stalled in part due to Cody Whitehair’s third-and-6 team penalty on Lions 25.

Bears wide receiver Allen Robinson will not play in Thursday’s game against the Lions as he continues his recovery after a hamstring injury.

Robinson was listed as doubtful to play after not training all week.

The Bears announced former quarterback Justin Fields (ribs), running back Damien Williams (calf) and defensive lineman Akiem Hicks (ankle) would not play due to their injuries.

Bears safety Eddie Jackson is returning from a hamstring injury after missing the last two games.

Andy Dalton threw 220 yards and a touchdown, and Cairo Santos scored two field goals to help the Bears take a 13-7 lead at the break against the Lions at Ford Field.

Amani Oruwariye picked up Dalton’s pass to Damiere Byrd in the goal zone later in the second quarter, but the Lions went nowhere on their drive and gave the Bears the ball back with 1:09 to play in the half.

Santos scored a 43-yard field goal to end the half.

A Bears defense that got off to a bad start got a takeaway late in the second quarter.

When outside linebacker Robert Quinn took down quarterback Jared Goff, Trevis Gipson knocked the ball out and recovered it. Officials initially called Goff down, but Matt Nagy challenged the call and it was overturned.

The Bears started cornerback Artie Burns instead of second-year corner Kindle Vildor, who battled Sunday against the Ravens, including on their game-winning drive.

The Lions grabbed Burns almost instantly. On their first drive, wide receiver Josh Reynolds beat Burns to catch a 39-yard touchdown pass from Jared Goff to a 7-0 lead with 9:33 left in the first quarter.

The Bears came to the 10-yard line on a drive where Dalton had a 33-yard pass to Mooney and a 17-yard pass to Graham who made a nice, low grip. But Dalton threw back-to-back incomplements into the end zone on the second and third down, the latter almost an interception by Oruwariye before tight-end Jesse James knocked it down.

Santos then scored a 28-yard field goal to reduce the Lions’ lead to 7-3 with 13:24 left in the second quarter.

Bears inside linebacker Roquan Smith left the game on Lions’ first drive in the second quarter, briefly walked into the injury tent and then remained on the sidelines with his helmet off. The Bears announced he was out with a hamstring injury.

Outside linebacker Sam Kamara has been ruled out with a concussion.

Lions running back D’Andre Swift also fell in the second quarter with a shoulder injury and is out for the rest of the match.

NFL Network reported On Thursday, an MRI scan of novice QB Justin Fields’ ribs showed he had “small fractures” in a few of his ribs.

It’s not a major injury, but worse than the store’s original report that initial tests showed his ribs were just bruised.

“We’re really lucky it’s not something long-term; it’s definitely not an IR thing,” Bears general manager Ryan Pace said on his pregame show on WBBM-AM 780. “It’s more of an everyday thing. We come through this game. The good thing about it is that you will have a little extra time after this game to reevaluate, not just Justin, but some other guys, get them healthy and get them ready to roll. ”

Bears coach Matt Nagy said earlier this week that he did not know if the injury was from a single game or multiple hits. Fields left Sunday’s loss to the Ravens early in the third quarter after being taken down on a 6-yard run.

Thursday is the first game he has missed since taking over as Bears starter for then-injured Andy Dalton in Week 3.

In Halas Hall this week…

After the Bears’ fifth consecutive defeat on Sunday against the Ravens, their short week to get ready for the Lions was disrupted by a report that the Bears were planning to fire coach Matt Nagy after the Thanksgiving game. Bears chairman George McCaskey told players and coaches that the report was not true, according to Athletic, but it still put a wrinkle in the team’s preparations.