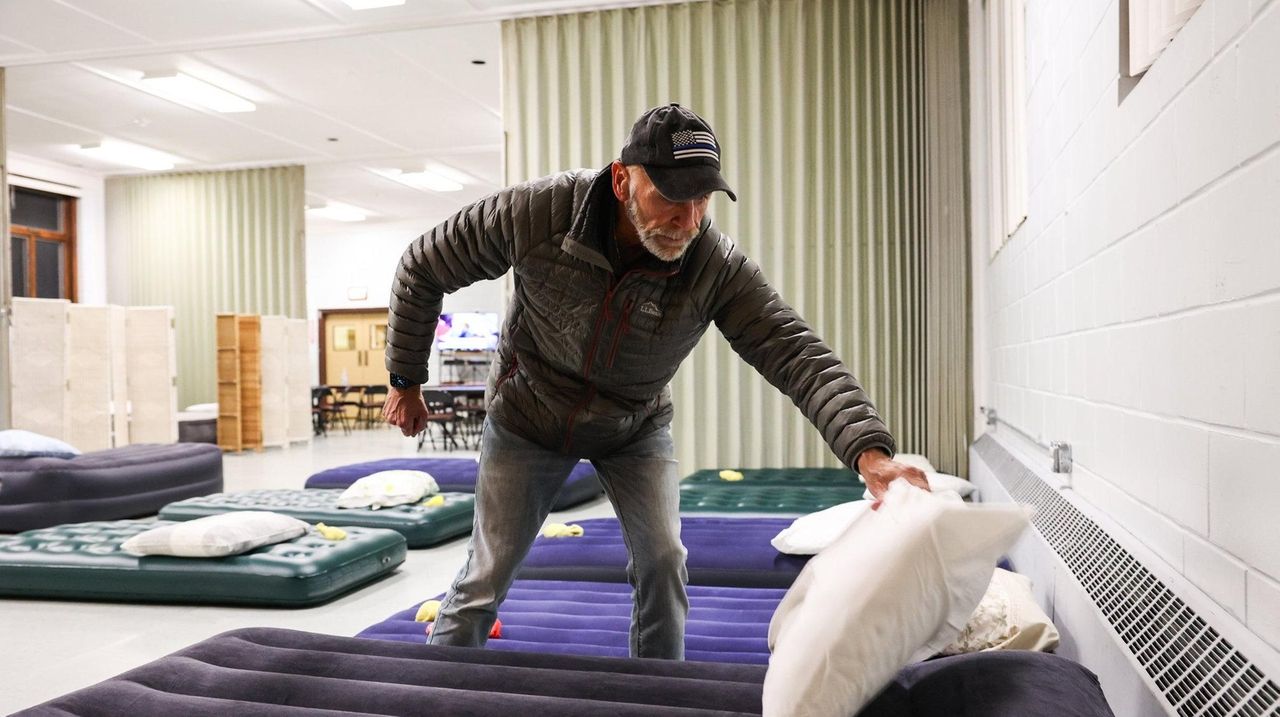 One recent night, as temperatures plunged into the 1930s, an ever-growing number of people in need of shelter made their way to a congregation hall at Greenport’s Saint Agnes Roman Catholic Church.

It is an unfortunate ritual from the late autumn in the church, which every November begins its month-long role as a refuge for people who would otherwise spend the harsh winter months on the streets.

“It’s like the battlefield,” said Jim, who did not disclose his last name, about his daily challenge of finding shelter.

The church that gives him a place to sleep has restored his hope, Jim said.

“One tends to start believing in some form of spirituality when one starts going to places like this,” he said. “We’re trying to start changing our ways. The people here who help know exactly what the homeless are here for. There are good people here.”

The Greenport Shelter is named in honor of John Bendick – a Greenport resident and coordinator of the shelter who died in 2010 – is now in his 16th year. In partnership with Maureen’s Haven, a Riverhead-based outreach organization, the shelter houses between 30 and 40 people each Tuesday, with volunteers providing them with a warm, dry place to sleep as well as hot showers, meals, medical care and winter clothing.

Last year during the COVID-19 pandemic, Father Piotr Narkiewicz, the pastor of the church, said the shelter made the decision to open its doors for several more days during the week after several similar facilities nearby were forced to close. When additional shelters reopened, the church returned to its schedule for Tuesday night.

The biggest news, politics and crime stories in Suffolk County, in your inbox every Friday at noon.

“We thought ‘What is the choice? To leave people outside, or to take a risk and serve them?’ “said Narkiewicz. “And so, what are the chances? If we protected ourselves with a mask and washed everything, it might not be so bad, we thought. Miraculously, no one got sick. We were very blessed, and our volunteers were very brave to serve them. “

Volunteers like Alex Zimardo, 71, and Jim Defrancesco, 66, both from Greenport, agreed that despite the challenges posed by the pandemic, helping the less fortunate is still the most rewarding part of their job.

“Some of these people are doing well day by day and it’s really about helping people,” said Defrancesco, who works with security for the shelter. “That’s what it takes in this country for more people to start thinking about helping others.”

Zimardo, who helps set up the shelter with her husband Bob Zimardo in the morning, said that while the parish is small and in a modest community, she admires how much work people do to help them without a home.

“To see how much is being done in this smaller community of older people who do not have much, and the respect they treat guests with,” Zimardo said, “I am constantly impressed by that.”

Jean-Paul Salamanca covers the East End. He focuses on Riverhead, Southold and Greenport on the North Fork, as well as Hampton Bays, Westhampton Beach, Flanders, Riverside and Quogue on the South Fork.